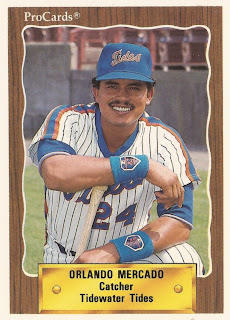 Orlando Mercado got off to a slow start at AAA Spokane in 1981. After hitting 11 home runs the year before, by mid-June, he hadn't hit any, The Spokane Spokesman-Review wrote.

After a talk from a new batting coach, though, Mercado went out and hit home runs on consecutive nights, The Spokesman-Review wrote.

"He talked to me and said I hit the ball well, but I was hitting it to people," Mercado told The Spokane Spokesman-Review. "So he told me to pull my shoulder a little bit when I swing."

Mercado went on to hit just two other home runs that year. The next year, though, he hit 17 - 16 at AAA and one in the majors.

Mercado went on to a career that saw eight seasons in the majors, 253 games. By the time it was over, Mercado's major league home run total stood at seven. Mercado has since gone on to a long coaching career that continues into 2012.

Mercado's career began in 1978, signed by the Mariners as an amateur free agent out of Puerto Rico. He played that first year at short-season Bellingham. He made AA Lynn in 1980, then AAA Spokane in 1981.

He returned to AAA for 1982, at Salt Lake City. Then, in September, Mercado made the majors in Seattle. Mercado got into nine games, with 17 at bats. He got two hits, one of them that grand slam.

After going through the Rangers and the Tigers' systems, by late 1987, Mercado was with the Dodgers, playing at AAA Albuquerque.

In September, Mercado returned to the majors, even though his Albuquerque team was in the playoffs. Mercado told The Los Angeles Times he was just hoping for a ring.

"I've been in baseball 10 years and I've never got a ring. I wanted to play on a championship team," Mercado told The Times. "But I'm here, and I've waited for the chance. Maybe I'll play a little and they'll find out what I can do."

In seven games for the Dodgers, Mercado got five at bats, three hits. By 1988, Mercado was with the Athletics. He got into 16 games, part of that time spent as a fill-in for Terry Steinbach. In a May game, Mercado dropped a relay to the plate, allowing a run to score. Later, though, he hit another big league home run.

Mercado got into 19 games with the Twins in 1989, then 50 final major league games in 1990 with the Mets and the Expos. In June 1990, then 28, Mercado knew his role, as the younger Todd Hundley got moved up to the majors over him.

"I'm playing everyday and that's all I wanted to do," Mercado told The Newport News Daily Press. "The last couple of days I've been swinging the bat better. I'm happy here."

Mercado continued playing in the minors into 1994. He has since gone on to his long post-playing career, serving as a hitting coach in the minors and, by 2004, bullpen coach for the Angels. For 2012, Mercado is continuing in the Angels system, as minor league catching coordinator.