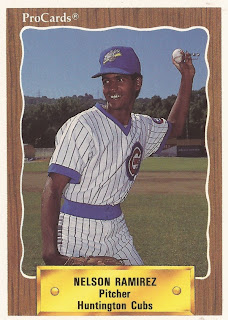 Nelson Ramirez had a positive outlook going into his first professional season, according to his 1990 ProCards card back.

He also believed there was more to his opportunity than his ability to pitch.

"I give thanks to God for the chance to play in Huntington," Ramirez was quoted as saying. "I played three years in my native Dominican Republic. I want to reach the majors."

For Ramirez, though, he would never reach the majors, or even get out of that first season as a pro. His entire pro career consisted of just three appearances at rookie Huntington, all in relief.

Ramirez' professional career began and ended that year in 1990, signed by the Cubs as an undrafted free agent out of his native Dominican Republic. It was the year Ramirez would turn 19.

On his card back, he credited a pitcher by the name of Gabil Rodriguez with influencing him. Ramirez liked to learn from Rodriguez' style of pitching. Exactly who Ramirez was referring to, or whether that pitcher made the pros in the U.S. is unclear.

Whatever his influences were, on the field for Huntington, they weren't enough.

Ramirez got into three games for Huntington, 5.2 total innings of work. In that span, he gave up six earned runs, including a home run. He also struck out seven and walked four. His ERA in those outings, though, neared 10, at 9.53. He's not credited as playing again.