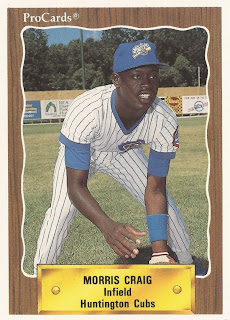 Morris Craig had specific goals going into his first professional season in 1990, according to his card back.

Those goals addressed both that first profession season - and his sixth.

"My goal this season is to hit four home runs, steal 15 bases and help my team win games," Craig was quoted as saying on his card back. "I plan to be in the majors in 1995."

While Craig went out and had a good first pro season, helping his team to victories, and is last recorded as playing in 1998, he ended up not meeting any of his other goals. His last affiliated season came just two seasons later, his career ending never making it to AA.

Craig's career began that season in 1990, signed by the Cubs as an undrafted free agent out of his home state of Alabama. Craig is also referred to by the shorter Mo Craig.

With the Cubs, Craig played his first season at rookie Huntington, getting into 48 games and hitting .310. He helped his team to a July win, singling and scoring late. He singled and scored again in an August game and hit a lead-off home run in another game that month.

As for his predictions for that season, Craig picked up just that single home run and stole eight bases.

For 1991, Craig split time between short-season Geneva and single-A Peoria. Between them, he got into just 36 games, hitting .181.

He came back for 1992, playing again between the two levels. This time, though, he got into a total of 90 games, hitting .252. In one June Peoria win, Craig knocked in four runs, getting just 10 other RBIs on the year.

That 1992 season ended up being Craig's final season in the Cubs system and in affiliated ball. He is credited as coming back in 1997 to play for independent Tupelo, and again for a brief stint in 1998, ending his career.