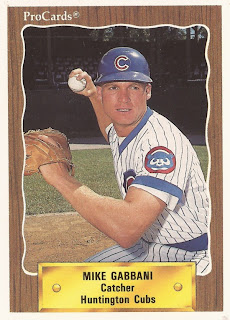 Coming out of college in 1990, Mike Gabbani described his style of play to his new temporary home in Huntington, WV.

"I like to go out and play hard," Gabbani is quoted as saying on his 1990 ProCards card back, "day in and day out."

Gabbani was coming off a season where he played hard for Cal State Dominguez Hills, once picking up three home runs in a single game. Gabbani, though, didn't have much time to play hard in his pro career. It was a career that lasted just three seasons, never getting into more than 50 games in any one season.

Gabbani's pro career began that year, taken by the Cubs in the 18th round out of Dominguez Hills.

At Dominguez Hills, Gabbani hit those three home runs in an early-April 1990 non-conference contest. He then knocked in three in a game later that April. In early May, he hit a grand slam.

In all for Dominguez Hills, Gabbani hit .285, with six home runs. A catcher, he also threw out 51 percent of runners trying to steal on him that year, The Los Angeles Times wrote.

With the Cubs, Gabbani started at rookie Huntington, hitting a home run in a mid-August game and a two-run shot later that month. In all, Gabbani hit .275 over 50 games for Huntington that year, with five home runs.

For 1991, Gabbani moved to high-A Winston-Salem, but he only got into 41 games. He hit .239 with a single home run. His 1992 campaign was even shorter, just 16 games. That turned out to be his last with the Cubs organization.