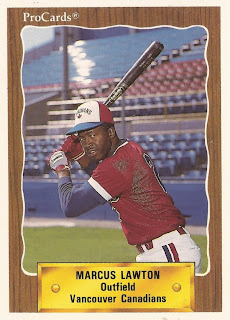 Going into second base, the Yankees' Marcus Lawton was looking to break up the double play, disrupting Jim Gantner's relay to first in this Aug. 15, 1989 game.

Instead, what got broken up were two Gantner ligaments. The umpire awarded the double play, ruling Lawton's slide illegal, The New York Times wrote, a decision that Yankees Manager Dallas Green disagreed with.

''The way we saw it was a young shortstop giving a low relay throw to second base that held up the play," Green told The Times. "That was just hard baseball. There was nothing dirty about it."

That play came in Lawton's fifth major league game. And, whether the play was dirty or hard baseball, Lawton would only get into five more, his major league career ending as the 1989 season ended.

Lawton's professional career began in 1983, taken by the Mets in the sixth round of the draft, out of high school. He played that year in the rookie Gulf Coast League, moving to Kingsport and Lynchburg in 1984.

He played 1985 at single-A Columbia, swiping bases in the triple digits, at 111. He stole another 58 the next year back at high-A Lynchburg.

Lawton didn't make AA until 1987, arriving at Jackson. There, he hit .300, along with five home runs. His first look at AAA came the next year, with 94 games at Tidewater.

Lawton arrived in the Yankees system in July 1989, traded there by the Mets. His major league debut came that Aug. 11. In his 10 games for the Yankees that year, Lawton got three hits in 14 at bats.

Lawton played three more seasons in the minors, playing 1990 with the White Sox at AAA Vancouver. Then it was the Angels and Royals systems, ending his playing career.

But he would return three years later, for replacement ball, signing with the team that originally drafted him, the Mets.

In the interim, Lawton headed back home to Gulfport, Miss., and took a job in a casino. With the replacement Mets, Lawton told The New York Daily News he found it more relaxed than his in his playing days.

"Believe it or not, the games down there seem a lot more fun because it's not as serious and there's not as much pressure," Lawton told The Daily News. "I play every game to win but in Mississippi, I know if I have a bad day I won't be looking over my shoulder."

Lawton ended up going 1 for 23 that spring and didn't steal a base. He also didn't make it to the end of camp, he was cut by late March, The Daily News wrote.

Lawton's brother Matt Lawton debuted in the majors later that year in 1995 and go on to a career longer than his brother's was. Matt Lawton played in a total of 12 major leagues seasons, totaling 1,334 major league games.