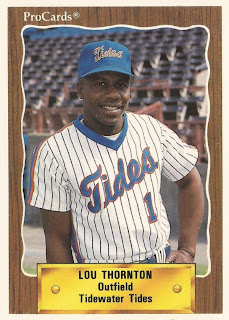 The talk was that Lou Thornton might stick around, even when everything was over. The former major leaguer was 31, and he was a replacement player for the Mets.

Thornton, though, didn't think so.

"I've been out of the game for four years. Am I their guy? No way," Thornton told The New York Daily News. "My expectations haven't changed. The guys (Mets GM Joe McIlvaine) is looking at for the fifth outfielder's job, he knows who they are. They aren't me."

The strike over, Thornton wouldn't stick around. It was finally the end of a career that appeared over years before. It was a career that began in 1981, when Thornton was taken by the Mets in the 19th round of the draft.

He ultimately played in parts of five major league seasons, his last coming five years before the strike.

Thornton spent his first two professional seasons in rookie ball with the Mets, at the Appalachian League's Kingsport team. The next two seasons, Thornton spent at single-A Columbia and Lynchburg. He hit .268 at Columbia in 1983, then .275 with Lynchburg in 1984.

It was enough for the Blue Jays to select Thornton in the Rule 5 draft, meaning he had to make the major league club and stay there the full year or the Blue Jays would have to offer him back to the Mets.

That spring in 1985, Thornton made an impression, hitting a game-winning home run in a late March game. Thornton stuck around in the majors, making the rare jump all the way from single-A.

He played in 56 games hit one home run and hit .236 in a year where the Blue Jays won the division. Thornton hit that one home run in a July game, a game in which he started. In three at-bats, Thornton got two hits, according to The Associated Press. With that performance, Thornton was looking to start more.

"I don't think I'm the kind of player who can produce when I'm playing once every two or three weeks," Thornton told The AP after that game. "I know that statistics will tell you that I always do better when I start."

But he also made mistakes. In June, Thornton hit one to the wall and made it to third. But the Brewers appealed, arguing he had missed first base. He did and he was called out, according to a wire account.

Thornton made it the entire year with the big club. He spent the entire next year at AAA Syracuse. He stayed with the Blue Jays system through 1988, getting back to the majors for 12 games in 1987, then 11 games in 1988. He got four at bats between the two years, getting one hit.

After spending brief stints with the Brewers in spring training, then the Pirates, Thornton returned to the team that drafted him for 1989, the Mets. He got into 13 games for the Mets in 1989, getting 13 at bats and four hits.

He returned for three more games in April 1990, not getting to bat. He spent the remainder of the year at AAA Tidewater, ending his professional career.

Until 1995. Called by the Mets, Thornton signed up to be a replacement player. The regiment was a little bit more than he anticipated, however. He left camp in early March, upset at the team's training routine, according to The AP. He would soon return.

Come April, however, with the strike over, Thornton wasn't invited to stay on. The Daily News found him in the team hotel lobby with a mixed drink.

"It's been nothing but a picnic," Thornton told The Daily News. "It was just like going to the bank to get a home-improvement loan. Everything for me was a positive. I raise a cocktail to the whole idea of this spring."