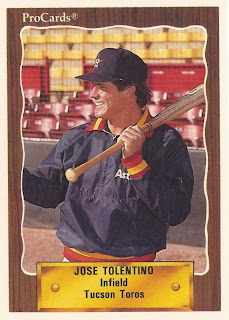 "This is the best chance I've had," Tolentino told The Orlando Sentinel in mid-March, "a chance to show what I can do when it matters."

Tolentino spoke having spent eight long seasons in the minors, without making the majors. He wouldn't make Houston out of spring training, but he would make the Astros later in the year. Tolentino got into 44 games that year marking the extent of his big league career.

Tolentino, though, would go on to a successful post-playing career as an announcer, a career he almost didn't get into.

Tolentino's career began in 1983, taken by the Athletics in the seventh round of the draft out of the University of Texas. Tolentino joined the Athletics system having helped Texas win the 1983 College World Series.

Tolentino had the game-winning bunt in the championship game, after going just 2 for 15 in the series, The Associated Press wrote. "You've got to make adjustments when you're pressing," Tolentino told The AP after his series-winning bunt.

With the Athletics, Tolentino started at short-season Medford. He hit .331 with seven home runs. He hit his first home run in a July 8 game.

He made AA Albany in 1984, hitting .284 there in 71 games. Moving up from single-A Modesto in late June, made his Albany debut hitting two home runs, and an RBI single, The Schenectady Gazette wrote.

"It's a good feeling to start like that," Tolentino told The Gazette. "When you come up, you're not expected to do much, you're supposed to just check it out."

Tolentino moved up to AAA Tacoma in 1985, but never made the next jump to Oakland. He stayed in the Oakland system through 1987, when he was traded to the Rangers. He moved on to the Astros system in mid-1988, the team that would bring him to the majors.

With the Astros' AA team in Columbus in 1988, Tolentino hit .305 with nine home runs. He hit two home runs in one late June game.

Tolentino spent 1989 and 1990 with AAA Tucson, returning there to start 1991. Tolentino got his call up to Houston in late July. In 44 games, he hit .259 with one home run. That one home run came in late August against the Mets.

Tolentino returned to play with the Pirates at AAA Buffalo in 1992. After time in Mexico, Tolentino has gone on to a successful career as a Spanish-language broadcaster with the Angels, Fox Sports and elsewhere. He also runs his own baseball school, Jose Tolentino and Friends Pro School of Baseball in California.

Tolentino told The Los Angeles Times in May 1998 that he got into broadcasting after a chance encounter. Then with the Angels, Tolentino served as analyst, with the background of a player.

"That's where I have an advantage," Tolentino told The Times. English listeners "have Joe Morgan, all the experts. In Spanish, usually there's not a player doing radio. I want to educate. I think [if] you give a lot of information to people, they grab whatever they want to grab."