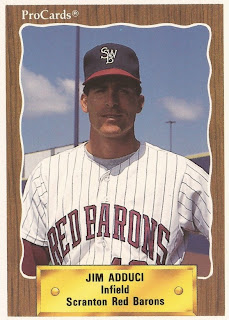 Jim Adduci made the Brewers out of spring training in 1988, but he hardly saw any action. By late-May, Adduci had been in all of nine appearances, getting four at bats, The Milwaukee Sentinel wrote.

Then Adduci's manager Tom Trebelhorn thought he'd try something different and give Adduci a start, at designated hitter.

"He deserves a chance now to see if he can be a good left-handed bat for us," Trebelhorn told The Sentinel. "It could have been a mistake on my part not to play him more. We'll find out."

Adduci ended up going 2 for 4 that game. He also ended up having the best season of his four with time in the bigs, seeing time in a total of 44 contests for the Brewers, knocking in 15 and getting his only home run.

Adduci's career began in 1980, taken the Cardinals in the seventh round of the draft out of Southern Illinois University.

Adduci started at rookie Johnson City, first making AA Arkansas in 1981. He then made AAA Louisville in 1983, then major league St. Louis that September.

Adduci didn't return to the majors until 1986, with the Brewers. He was traded there for 1985 in a five-player deal. After just three games with Milwaukee that year, Adduci made the jump to Japan in 1987, playing for the Yokohama Taiyo Whales.

He returned stateside for 1988, getting into those 44 games with the Brewers. In the midst of that slow start, Adduci told The Sentinel he realized it was a different role, one that was difficult to get used to.

"But I'm not taking it for granted," Adduci told The Sentinel, "because I wanted a long time to get to the big leagues. I'd rather be here than playing every day at Denver."

Adduci moved to the Phillies for 1989, playing at AAA Scranton. In late June, Adduci told The Philadelphia Inquirer he was just happy to still be playing.

"But I don't have any false notions or pretenses that I'll be back in the big leagues," Adduci told The Inquirer. "I really try not to dwell on those kind of things. I've been around baseball long enough to know that that's really not the best thing to sit around and do."

Adduci, though, did get back to the majors. In late July, he made it to Philadelphia for 13 final big league games. One more season spent at AAA Scranton and Adduci's career was done.

Now, Adduci's son James Adduci is trying to go where his father went. The younger Adduci, though, has taken a little longer, and, in 2012, he was still trying to get there, having played seven seasons in the minors and getting to AAA, but not yet to the majors.