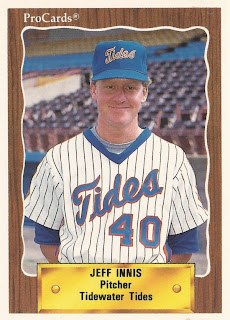 Jeff Innis wasn't sure if he wanted to continue. But, after being sent down to AAA Salt Lake City in spring 1994, it was Innis' wife convinced him to continue, The Deseret News wrote.

He went down, hoping a new knuckleball would get him back, The News wrote.

"I'm going to use this time to make myself a better pitcher," Innis told The News that April. "I'm sure Salt Lake is a very nice place and all, but I hope I'm not there very long."

By that point, Innis had played in seven major league seasons, all with the Mets. He wouldn't get an eighth. Innis' career did end the following season, after 13 seasons as a pro.

Innis' career began in 1983, taken by the Mets in the 13th round, out of the University of Illinois.

Innis started at short-season Little Falls, moving to AA Jackson in 1984. He made AAA Tidewater to start 1987. He made Flushing in May 1987.

In his debut, Innis struck out three in relief. But he also gave up the game-winning home run in the 10th to the Giants' Jeffrey Leonard.

"I was nervous because of pitching for the first time in the majors," Innis told The Associated Press after the loss, "but I still thought I threw him a good pitch. It sank well and he went after it and got it. Give him credit."

While he spent time in the majors for three-straight seasons, it also came with time back at AAA Tidewater. Innis started 1990 with the Mets, but found himself back at Tidewater by the end of April.

Going in to 1991, Innis could feel that he might get his chance.

"My goal in the past has been to just stay here as long as I could, to spend one less day with the minor leaguers," Innis told The New York Times that March. "I was afraid to think I was even going to make the team, much less help it. Now, I'm ready to say it and to do it."

Innis signed with the Twins for 1994, but never saw Minnesota. By the end of the year, Innis was with the Padres at AAA Las Vegas. He finished out his playing career in 1995, with the Phillies at AAA Scranton.