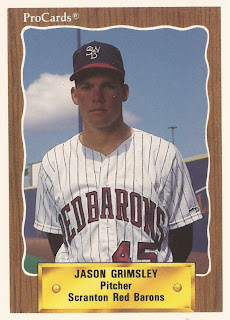 ''Grimsley was doing something to the baseball,'' Piniella told The Times after that May 1999 game.

Whether Grimsley was doctoring the baseball or not, he did do things that weren't natural.

Seven years later, Grimsley received a shipment at his Arizona home. Inside were two kits of human growth hormone, as outlined in the Mitchell Report. Following soon behind the shipment were FBI agents. Grimsley soon admitted that his pitching wasn't natural. He used steroids and HGH.

As news of the admissions came out, Grimsley's pitching career came to an unnatural conclusion.

It was a pitching career that had its beginnings in 1985, when Grimsley was taken by the Phillies in the 10th round of the draft. He made AA Reading in 1988 and hit Philadelphia for the first time in 1989.

In 1994, Grimsley went 5-2 with a 4.57 ERA with the Indians. He also had one more stat that wouldn't be widely known for another five years: One bat stolen.

On July 15, 1994, Grimsley climbed through the Comiskey Park ceiling and stole back an Albert Belle bat that had been confiscated by umpires on suspicion that it had been corked. Grimsley admitted to The Times in 1999 that he was the culprit.

"My heart was going 1,000 miles a second," Grimsley told The Times. "I just rolled the dice, a crapshoot."

In 1996, Grimsley got into 35 games. Then it was two years in the minors with three different organizations.

He returned in 1999 with the Yankees and his career took off. That year, he got in a career-best 55 appearances with the Bombers, going 7-2 with a 3.60 ERA. It was enough for Don Zimmer to take notice, especially his sinker.

"It's tremendous," Zimmer told The New York Daily News. "It's so good you expect a grounder or a topped ball every time."

"That," Grimsley told The Daily News in response, "is great to hear. That tells me they have confidence in me."

By the end of May 2006, Grimsley was on the way back up, already getting work in 19 games for the Diamondbacks. Then the federal investigation got out and he was done, Arizona released him. He was also soon suspended for 50 games, based on his HGH admissions.

To the FBI, Grimsley admitted to using HGH, the kind that he received in that shipment. He also previously used steroids, but stopped after baseball started testing, according to the Mitchell Report.

After the revelations, Grimsley went into virtual seclusion. When ESPN attempted to catch up with him in late 2007, he declined their requests through his agent.

"He is not interested in doing any interviews," Grimsley's agent Joe Bick told ESPN. "This is a guy who got caught cheating and wants to move on. He just wants to get his life back together, not in the public eye."