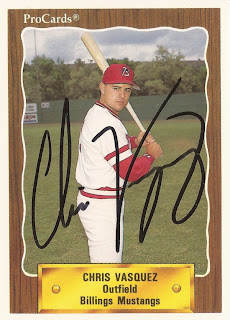 Taken by the Reds deep in the 1989 draft, California high schooler Chris Vasquez had a choice, one presented to him by his new team.

He could sign right then, Vasquez recalled, or he could wait and get some time playing in college. For the 40th-round pick, the team's initial offer - just $1,000 to sign - seemed to suggest the latter.

"They pretty much told me that if I was to sign for that, anything could happen to me," Vasquez recalled to The Greatest 21 Days. "I could have a bad year, they could let me go because there was nothing really invested in me."

Vasquez did what the team suggested, and he went out and had a good year on the college field. By the time he was done, that $1,000 cash offer turned increased 20 times.

"They were honest with me, and it turned out to be the best thing I could have ever done," Vasquez said.

While Vasquez never did make the majors, he did go on from there to a career that spanned 13 professional seasons, not playing his last game until 2004.

Vasquez spoke with The Greatest 21 Days by phone recently from his Iowa home, a transplanted Californian living in a city, Cedar Rapids, where he once played.
Vasquez touched on his roots, growing up playing baseball in Southern California. He also spoke the transition from high school and college ball to the pros, and of early attitude problems that often come with youth, problems straightened out after being sent home from his first season early.

From there, Vasquez touched on the successes and failures of playing in the low minors, as well as the frustrations of not getting higher. Then, there was the new baseball life of independent ball, a new baseball life that extended his career by almost a decade.

Vasquez grew up in Southern California's San Fernando Valley, his family first living in Reseda and then Van Nuys and ultimately going to school in Santa Clarita.

His first introduction to baseball, Vasquez recalled, was through his dad, watching him play fast-pitch softball around the Valley.

"He dragged me along to games, started working with me," Vasquez said. "Gosh, I always had a bat in my hand, or a ball when I was in diapers."

Vasquez first played organized ball at the age of 8, PONY ball in Canoga Park. From there, he started working and studying the game.

Vasquez recalled being told he didn't have natural ability to play the game, but he did have ability that could be brought out.

"I was one of those kids that had to work for every single thing that I accomplished on the baseball field," Vasquez said. "I was constantly practicing, constantly, and watching baseball games or reading books on Rod Carew and stuff like that."
Helping Vasquez bring that ability out was a coach he had by the name of John Torre. Torre, Vasquez recalled, took him under his wing when Vasquez was 15 years old. He'd watched Vasquez play since PONY ball and saw potential in him.

So, on nights when his father bowled, Torre took Vasquez over to Van Nuys, a place called Buddy's Bat-A-Way. And they would work.

Outfield, Vasquez recalled, seemed to come naturally. He could read the pitcher and the hitter. He wasn't fast, but he could pick the ball up off the bat well.

Soon after, Vasquez started realizing that he could do something with that ability.

Vasquez ended up doing well enough at Hart High School in Santa Clarita to get looks from scouts. Eventually, he was taken by the Reds in the 40th round.

Vasquez wasn't really that interested in college, realizing later that he may have missed opportunities to go to to a top-tier college baseball program.

Still, though, came that suggestion to play college ball. The Reds, Vasquez recalled, wanted to see him gain size and experience.

The college he went to was the College of the Canyons. He played well on the field, in spite of suffering a bad mountain bike accident the previous summer, after the draft, that left his jaw wired shut.

But the on-the-field stuff was pretty much all he did, Vasquez recalled. His attitude wasn't the best, so he pretty much just showed up and played. That attitude would continue into his first year of pro ball.
That first year, Vasquez was sent to rookie Billings, in Montana. He remembered the transition to the wood bats being the toughest. He had no idea what model was best for him, what weight or length was best, he recalled.

"It was like starting over again," Vasquez said, noting that many of his teammates were older, bigger and had been through college. "So, it was a tough transition, just learning how things worked."

He ended up hitting .286 over 54 games with Billings. He likely would have played in more games, had he and some teammates not been sent home.

His attitude, Vasquez recalled, caught up with him as he and a couple other teammates got caught breaking some team rules. He not only missed the end of the season, but also fall instructional ball and he had to write a letter of apology.

That also straightened him out, Vasquez recalled.

"I never had anything like that happen again," Vasquez said. "I ended up coming back and having a better year and ended up going to instructional ball in Florida. So it kind of made up for it."

Vasquez returned to the Reds for his second season in 1991, getting sent to single-A Charleston. He didn't start well and, mid-year, he was sent to single-A Cedar Rapids.
Vasquez recalled being told of the move after a 14-hour bus ride, at 3 a.m. He had an 8 a.m. flight to Chicago and then another bus ride to Beloit, Wisc., where his new team was playing that day. His new Cedar Rapids team? They also had a double-header that day.

"That was a long bus ride," Vasquez recalled of the last leg. "And we ended up playing 24 innings that day. I got the game-winning hit twice. ... It was a long one. I was cramping in my room all night."

Vasquez ended up hitting .267 that second half, hitting nine home runs. That compared to the .252 he hit at Charleston, with a single home run.

From there, Vasquez made high-A Winston-Salem, but lost about half of 1993 to a broken wrist. In 1994, he started back at high-A, but, after the hits stopped falling, he was back at Charleston.

Vasquez' frustrations, not so much attitude, would soon return, unable to get himself above single-A. Then came independent baseball and his new life in the game.