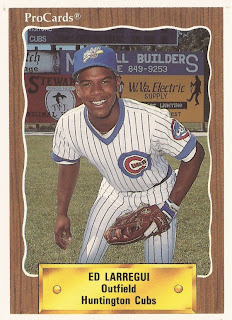 Trying to break himself out of high-A in 1994, Ed Larregui seemed to be doing a good job of it.

By the end of June, he was hitting .297 at high-A Daytona, according to The Orlando Sentinel. He'd also knocked in 48.

''This is me,'' Larregui told The Sentinel in early July. ''I'm running hard and hustling. This is what they've wanted from me. I've proved that. I got in my mind I'd have to look good, concentrate on hitting and moving the runner over.''

By the end of the year, Larregui was in AA Orlando. Orlando, though, would be as high as Larregui would get. In a career that spanned eight seasons, Larregui never made the majors.

Larregui's career began in 1989, taken by the Cubs in the seventh round, out of Villa Fontana High School in his native Puerto Rico. Larregui is also known by his full first name, Edgardo Larregui.

With the Cubs, Larregui hit the field first in 1990, the 17-year-old playing at rookie Huntington. He hit .186 there, with two home runs.

In a June 1995 game, Larregui knocked in three runs, one of them the game-winner. He also got praise from his manager, Bruce Kimm, according to The Sentinel.

"He's been one of our most consistent players all year,'' Kimm told The Sentinel. ''Ed is . . . definitely on his way up the hill."