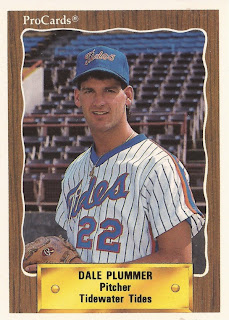 Taken in the 23rd round of the 1988 draft by the Mets, University of Maine product Dale Plummer was pleased he was taken, he told The Bangor Daily News.

He did wish he would have been taken higher, if only for the better bonus, Plummer told The Daily News.

"But I've worked my tail off," Plummer told The Daily News, "not too many people have this opportunity, and I want to take advantage of it. This is something I've always wanted to do."

Plummer took advantage of it enough to play seven seasons professionally. It was also enough to get him tantalizingly close to the ultimate goal, the major leagues. He finally got his call, but he couldn't go. An injury two days before that call dashed those hopes.

Earlier, he'd had another close call, with cancer.

Taken by the Mets that year in 1988, Plummer started at short-season Little Falls and he did well. He went 5-1 in 25 appearances, all in relief. His ERA was a sterling 1.33.

For much of 1989, Plummer played at AA Jackson, going 5-0 with a 2.03 ERA. For 1990, it was AAA Tidewater for Plummer. But an injury, suffered in bunting drills, held his totals and his prospects down.

In late April, Plummer broke a bone in his pitching hand after being hit by a pitch during bunting practice, according to The Newport News Daily Press. He didn't return until July. The injury was perhaps enough for the hurler to hide his injured right hand behind him when a baseball card photographer snapped his photo in May.

After he returned, Plummer pitched four games back at AA Jackson, his last time below AAA. He played in the Mets system through 1993, continually at AAA, with ERAs of 3.99, 3.57 and 5.16, all without a call up to Queens.

Late in his 1992 season, though, he was diagnosed with testicular cancer, according to The Daily News. After surgery and chemotherapy, Plummer was back on the mound for 1993.

"There's nothing you can do," Plummer told The Daily News in October 1993 of his reaction and his wife's reaction after hearing the news. "We put everything in the Lord's hands. We consider ourselves very blessed."

Out of baseball for 1994, Plummer returned to the game for spring 1995, as a replacement player with the Red Sox. Plummer's uncle, the Red Sox new pitching coach John Cumberland. invited him to camp, according to The Daily News. Plummer had played for Cumberland before, in 1990 at Tidewater.

The strike over, Plummer stayed on at AAA Pawtucket. He went 9-9, with an ERA of 5.19. It was also that year that Plummer got his call to Boston. But he was injured.

"I knew I couldn't pitch because of my groin," Plummer told The Kennebec Morning Sentinel years later, upon his induction into The Maine Baseball Hall of Fame. "I would have made my debut in Yankee Stadium."

Plummer has gone on to become a coach in the college ranks. In November 2006, Plummer was named interim coach at Colby College in Waterville, Maine. He lost the interim tag a year later.
He continues in that post for 2013.