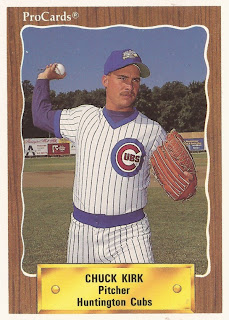 The Daytona Cubs needed a reliable closer in May 1993 and Chuck Kirk appeared that he may be the guy, according to The Daytona Beach News-Journal.

He appeared to be that closer after picking up his third save, coming into and getting out of an eighth-inning jam, The News-Journal wrote.

"Kirk is Mr. Reliable out of our bullpen at this time," Daytona pitching coach Les Strode told The News-Journal. "He slammed it closed."

Kirk's time as the Daytona closer, though, ended up being brief. He got just one more save, for four total in 20 total outings on the season. That season ended up being Kirk's last.

Kirk's pro career began back in 1990, taken by the Cubs in the 31st round of the draft, out of Jacksonville University in Florida.

Kirk played at Jacksonville in 1989 and 1990, helping the team to the NCAA South Regional. He later returned to the school in 2011 for an alumni weekend.

With the Cubs, Kirk started at rookie Huntington, getting into 10 games there. He picked up one July save on seven pitches. That same month, he also picked up a ninth-inning win.

From Huntington, Kirk moved to short-season Geneva, getting 14 outings, seven starts there. Between the two levels,  Kirk posted a 3.33 ERA.