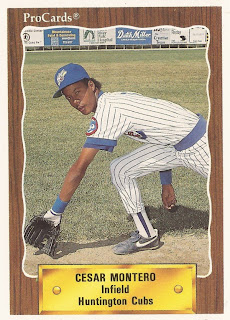 Asked what player was his sports idol, Cesar Montero responded Juan Samuel, according to his 1990 ProCards card back.

He chose Samuel as the player he admired most, he explained, because he like Samuel's style of playing the game.

Samuel that year was in his eighth season with time in the majors, part of a career that would see 16 major league campaigns.

Montero's professional career began and ended that year in 1990. It began as the Cubs signed him as an undrafted free agent out of his native Dominican Republic, the same country from which Samuel hailed.

Going into that season, Montero, just 17 when the season began, was quoted on his card back as talking about his past, as well as looking toward the future.

"I feel ready to come to Huntington and play professional baseball," Montero was quoted as saying. "I began playing baseball while growing up in the Dominican Republic. My goal is to play in Wrigley Field."

With rookie Huntington that year, though, the infielder Montero was credited with appearances in only 14 games, 18 plate appearances.

In those 18 plate appearances, Montero picked up five hits, two of them doubles. He also walked twice and struck out six times. Those ended up being his only professional at bats. The teenager did not return for a second season.