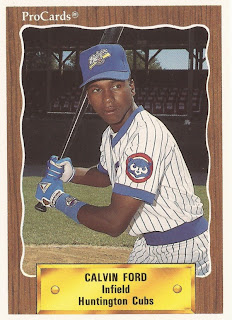 With two outs in the ninth inning of this August 1990 contest, the visiting Huntington Cubs were up 2-1.

The Burlington Indian smacked a base hit. The runner on second turned past third, headed home.

Huntington would also end up winning by that same 2-1 score, thanks to outfielder Calvin Ford. Ford fielded the ball and fired it home, according to The Portsmouth Daily Times, cutting down the runner and winning the game for Huntington.

Ford was in his second professional season that year with Huntington. It was also his last, his career ending a few weeks after that game-ending outfield assist.

Ford's brief pro career began in 1989, taken by the Cubs in the sixth round of the draft, out of Ontario High School in California.

In high school, Ford was called his team's best hitter, according to The Los Angeles Times. He also was a decent starter, going 6-4 by late-May 1989.

With the Cubs, Ford started at rookie Wytheville in the Appalachian League. He got into 44 games, hitting three home runs and knocking in 19. But he also hit just .191.

For 1990, Ford stayed in the Appalachian League, moving with the club to rookie Huntington. He got into 55 games that year, doubling and scoring in a late-June rally.