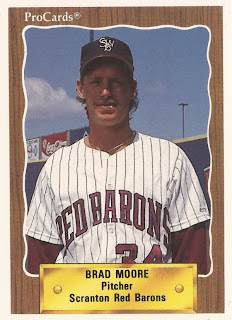 Brad Moore's adrenalin was flowing and he was pumped, he told The Reading Eagle in June 1988.

More was making his major league debut with Philadelphia and he made the most of it, throwing 2.2 innings of scoreless relief, The Eagle wrote.

"I was also excited about being there," Moore told The Eagle. "I just wanted to do whatever I could to get them out, just keep the ball down. It worked out pretty well."

Moore's professional career began in 1986, signed by the Phillies as an amateur free agent out of Grand Canyon University.

With the Phillies, Moore started at short-season Bend, moving to single-A Clearwater and AA Reading in 1987. For 1988, Moore returned to Reading. That June, he made the jump directly to Philadelphia.

With the Phillies in 1988, Moore got into those five games, debuting June 14. He gave up four hits in those 5.2 innings of work, walked four and struck out two, all without giving up a run. He then played out the year at Reading.

In spring 1990, Moore did what he could to return to the majors, going four innings by the end of March, without giving up a run, according to The Philadelphia Inquirer.

"I feel real comfortable right now," Moore told The Inquirer. "I feel like everything is clicking."

He also made the team, appearing April 12, going an inning and giving up two hits, but no runs. He gave up a run over two outs in his second outing, then had another one-inning, no-run appearance in his third. That third outing, April 25, proved to be his last appearance in the majors.

Moore played out 1990 at Scranton and at Reading. He then continued playing in the minors through 1994, playing at AAA with the Mets, Reds and Pirates, ending his career.

Moore's son Logan Moore is now making his bid for the majors, playing at high-A Clearwater for 2013. In 2012, as he started the year with short-season Williamsport, Moore talked about his dad's reaction when the son was picked in the ninth round in 2011 by the Phillies, according to The Williamsport Sun-Gazette.