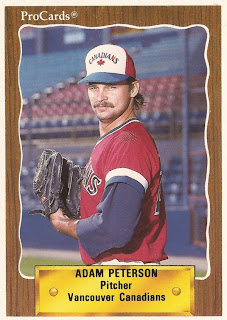 "From the short time I've been around him, I like most everything about him," Ellis told The Post-Herald. "He's a hard-working kid, very dedicated. He's aggressive on the mound, doesn't show any fear. And with his off-the-field habits, he's just flaky enough to be a good pitcher."

"I think he's got a chance to be a major-league pitcher," Ellis added later. "I don't think he'll pitch in the major leagues this year. How soon depends on when he comes up with a third pitch."

Peterson did make the majors that year, for a single, shaky September appearance. He went on to pitch in parts of five seasons for the White Sox, getting into a total of 39 major league games.

Peterson's path to the majors began in 1984, taken by the White Sox in the fifth round of the draft. He made AA Birmingham briefly in 1986, returning in 1987.

His 1987 year found Peterson back at Birmingham. He also had a 12-9 record in 26 starts. His ERA on the season was 3.90. He also made the Southern League All-Star team and got his September call-up.

Peterson made his major league debut Sept. 19, against the Mariners. In four innings of work, Peterson gave up eight hits and six runs. He returned to Chicago for two more games in 1988 with not-much-better results. Peterson started both games, gave up nine runs and got a loss.

But his big league time was more of the same. In three appearances in 1989, Peterson gave up another nine earned runs for an ERA of 15.19. The Chicago Tribune called Peterson's performance puzzling, considering his efforts at AAA.

"I've got to suck it up," Peterson told The Tribune after his second bad start. "I know I can pitch. I've just got to show it."

In one July game, he went eight innings against the Red Sox, giving up three runs. But he still got the loss.

"I was labeled as 'five (innings) and fly,' " Peterson told The Tribune. "It's always nice to go out and get a complete game, but it would be nicer to win them."

Peterson spent what would be his final major league season with the Padres, traded there by the White Sox in spring 1991. With the Padres, Peterson started 11 games, going 3-4 with another 4.45 ERA. He played one more year at AAA and he was done.

But in May 1991, he pitched six solid innings pitching his Padres en route to a 5-2 victory over the Reds, The Los Angeles Times wrote.

He did it, The Times wrote, by trying to take the pressure off himself, something Peterson didn't always do.
"I used to always do that," Peterson told The Times. "I'd put all kinds of pressure on myself. I'd wake up, and say, 'Geez, I've got to basically pitch a no-hitter to open up peoples' eyes.' You just can't do that.
"You saw what happened when I didn't."