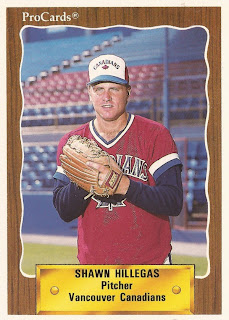 Shawn Hillegas had just completed an outing where he gave up seven hits, two runs and came one out shy of a complete game, all in his major league debut in August 1987.

"I was nervous as heck out there, but not really as nervous as I thought I was going to be," Hillegas told The Los Angeles Times. "I think after the first inning I settled down and settled into it."

Hillegas had gone into the ninth with a shutout. The crowed booed as Hillegas was pulled and cheered as he walked off, The Times wrote.

Hillegas would have his complete game shut-out, but not for another five years, his career gone in a different direction than he'd hoped.

Hillegas was drafted by the Dodgers in the first round of the 1984 January draft. He made AA San Antonio in 1985 and then AAA Albuquerque in 1986.

He returned to Albuquerque for 1987, going 13-5 on the year with a 3.37 ERA, earning that call-up in August. Hillegas got nine more starts for the Dodgers that year, his ERA settling at 3.57.

Hillegas returned to the Dodgers for 1988, getting 10 more starts. But, if his debut was a high, he hit his low a year later in August 1988. He started the game Aug. 4, faced four batters and was pulled without recording an out.

By the end of the month, Hillegas was on his way to the White Sox, traded for Rick Horton. Hillegas started six games that September for the White Sox, going 3-2 with a 3.15 ERA.

Hillegas started 1989 slow. He was 1-6 by May, and he was through with starting. And he's the one saw it. Hillegas went to manager Jeff Torborg and asked to be used in relief, The Chicago Tribune wrote.

"I told him I didn't feel like I was doing the job starting," Hillegas told The Tribune. "I'm putting the team behind in the game."

But Hillegas stayed up with the White Sox for the year, getting into a total of 50 contests with an ERA of 4.74. He played much of 1990 back in the minors at AAA Vancouver, getting back to Chicago for only seven games.

Then he was traded again, this time to the Indians, spending the entire year in Cleveland. He finished out his career with the Yankees and the Athletics, spending his final year, 1993, with Oakland.

His time with the Yankees was far from spectacular. He went 1-8 with a 5.51 ERA in 21 appearances, nine of those starts. But he did have a gem. That came July 20, against Oakland.

Hillegas got his complete game and he got his shutout, all in a 1-0 Yankees win.

"I set a personal goal for myself to get my first shutout and first complete game this year," Hillegas told The New York Times. "But best of all was the fact we won a close game. That was most important."