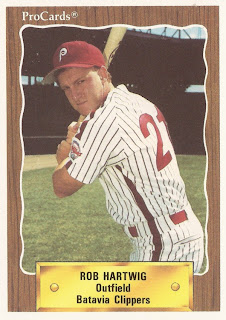 Rob Hartwig went back on the ball, thinking he could make a play. But he couldn't. The ball was over the fence for a grand slam.

"I thought it had a pretty good chance," Hartwig told The Omaha World-Herald afterward. "The wind was blowing pretty good."

This was in the 1987 College World Series. And that grand slam ended Hartwig's Louisiana State University Tigers' chance at the title. It was also a scene, of Hartwig leaning against the fence in the aftermath, that at least one fan recalled years later.

That grand slam also ended Hartwig's college career, one where he set the season mark and career mark at LSU for stolen bases.

He went on to turn pro, but apparently not until 1990, when he was signed by the Phillies as a undrafted 22-year-old free agent. The record doesn't give an explanation for the gap, including how a still-19-year-old Hartwig could be a senior in 1987.

Regardless, both his ProCards card and TheBaseballCube.com have the Phillies signee coming out of LSU, and starting his pro career in 1990.

At LSU, Hartwig played two seasons. He's also credited as playing previously at Harbor College in California, getting drafted in 1985 by the Padres in the January draft.

Leading up to the 1987 College World Series, Hartwig was the beneficiary of a balk in a key play. "The guy has a really good move when he doesn't balk. But yeah, I thought it was close," Hartwig told The Los Angeles Times after that game.