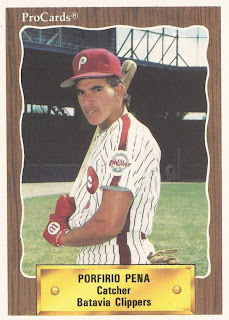 The Philadelphia Inquirer described that March 1990 scene: Seven Phillies signees, all from the Dominican Republic, listened to their Spanish-speaking coach Rolando Dearmas.

Among the seven was catcher Porfirio Pena, according to The Inquirer.

"The kids that seem to advance through the minors the fastest are the kids that pick up English the fastest," Dearmas told The Inquirer of the players, generally. "The smarter players are the ones who get ahead."

Pena was an 18-year-old kid from Bani, D.R. Regardless of his smarts, or ability to pick up English, Pena was only able to play professionally for two seasons.

Pena's career began that season, signed by the Phillies out of his native Dominican Republic.

With the Phillies that season, Pena played 29 games between rookie Martinsville and short-season Batavia. At Martinsville, Pena hit .161 over 14 games. At Batavia, he didn't hit much better, just .170, over 15 games.

For 1991, Pena returned to both Martinsville and Batavia. He got nine games at Martinsville, hitting .152. At Batavia ,he got into 23 games, hitting .194.