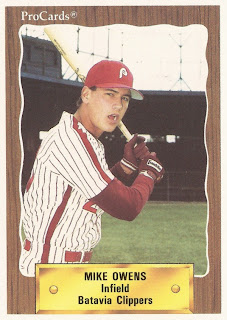 Batavia manager Don McCormack went down his roster to The Philadelphia Daily News in July 1988.

When he got to pitcher Mike Owens and a teammate, McCormack told The Daily News that both had major league ability.

For Owens, he was a month out of college, selected by the Phillies in the seventh round of that June's draft out of the University of Massachusetts Amherst.

Owens' professional path would take some turns, notably turning from pitching to position player to pitching again. But that path would last a relatively short four seasons. He also ultimately wouldn't take his abilities to the majors.

Owens started with the Phillies at short-season Batavia, a team in the same league as the Utica, NY,-native Owens' home town team, the Utica Blue Sox.

Owens returned to Batavia and to the field in 1990, improving his average to .264 and hittign 12 home runs, knocking in 49. He also returned to the mound for a game, picking up a win for an inning of work.