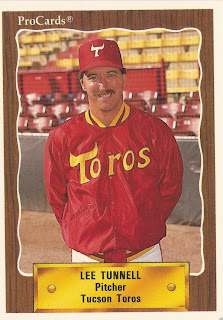 In his second big-league season, Lee Tunnell picked up a June win in 1983, after a rough spot for the young pitcher, including a five-inning, four-earned-run, no-decision in his last outing.

Tunnell later credited a teammate with helping him out of that rough spot, The Associated Press wrote. Veteran player Gene Tenace spoke with Tunnell before the game.

"I was just trying to relax him," Tenace told The AP after the game. "He's been having some problems, and I told him not to lose confidence in his ability."

The advice apparently worked. Tunnell went on to his best season of his career, going 11-6 in 25 starts, with a 3.65 ERA.

Tunnell's was a career that spanned 15 seasons, from his selection in the second round of the 1981 draft by the Pirates out of Baylor University, to time spent in six major league seasons, then time in Japan.

Tunnell didn't throw his final pitch until 1995, throwing at AAA for the Tigers, six years removed from his final major league game.

In just his second season, Tunnell also made Pittsburgh as a September call-up. In five outings, three starts, Tunnell went 1-1, with a 3.93 ERA.

For 1983, Tunnell stayed in Pittsburgh, getting those 25 starts and 11 wins. Tunnell's seventh win came Aug. 27, in the form of Tunnell's first big league shutout. In one stretch, Tunnell set down 17 of 18, according to the wire report.

"Yeah, it was a thrill," Tunnell told reporters afterward. "I had pretty good control and I used my slider a lot early and my curve later."

He spent 1986 completely back at AAA, returning to the majors in 1987 after the Cardinals purchased his contract. In his first start back in mid-May, Tunnell went seven innings, giving up two earned runs and picked up the win.

"I'm just happy to get a chance with this organization. As far as attempting to do good, I was just wanting to be in command of what I was throwing," Tunnell told The AP afterward. "I guess there's always a little doubt when you're not here, but I always had confidence."

Tunnell ended up going 4-4 in 32 outings, nine starts for the Cardinals in 1987. He also pitched in two games in the World Series, giving up one earned run in 4.1 innings of work.

Tunnell's major league time, though, soon ended. After playing 1988 at AAA for the Cardinals, he moved to the Twins in 1989, getting into 10 more games in relief, ending his big league career.

He played with the Astros at AAA Tucson in 1990 and 1991, before moving to Japan and the Fukuoka Daiei Hawks through 1993. He returned stateside for 1994 and 1995, ending his playing career.

Tunnell has gone on to serve as a minor league pitching coach and coordinator. In mid-2012, Tunnell was tapped to become the Brewers' major league bullpen coach, getting credit for helping turn around Brewers closer John Axford, according to The Milwaukee Journal Sentinel in March 2013.

“(Tunnell) is very relaxed, very poignant,” Axford told The Journal Sentinel. “Lee’s just good at looking at what a pitcher did in the past to be successful and getting them back to that point."