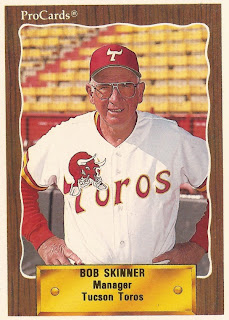 Previous Phillies manager Gene Mauch was fired for benching a star player. Now, just one year later, that same player, Richie Allen, had the latest Phillies manager on the way out, The Associated Press wrote.

The latest manager, Bob Skinner, resigned that August, feeling team executives were undermining him when it came to Allen, The AP wrote.

Skinner was in just his third season as a manager and third season after retiring as a player, having played in 12 seasons in the majors.

His post-playing career as a manager and coach, though, would continue for another two decades. He would even later serve as a scout.

Skinner's managerial career began in 1967, with the Phillies' AAA team in San Diego. He returned for 1968, moving up to the top job in Philadelphia mid-year. Skinner went 48-59 his first partial season with the Phillies and 44-64 his second.

By 1970, Skinner was back in San Diego, this time serving as hitting coach for the major league Padres. He stayed there through 1973.

By 1974, Skinner was back with the team that first signed him, the Pirates. It was also the one on which Skinner helped to a World Series win in 1960.

Coming off a Game 5 win in the 1979 World Series, Skinner worked with his players, making sure they were ready for Game 6. Skinner, though, noted to UPI he didn't have to do much.

Pirates hitters came through with four runs apiece in games 6 and 7, taking the series.

Skinner was still with the Pirates in 1985. In April, Skinner was talking clutch hitting to The Pittsburgh Press. Skinner dismissed any talk that there weren't real clutch hitters.

"You're darn right there are clutch hitters, guys who have a way of getting the hit or driving in runs when a team needs them most," Skinner told The Press.

By 1986, he was hitting coach for the Braves. By 1989, Skinner was back in the minors, managing at AAA Tucson. He stayed at Tucson for four seasons.

The Citizen wrote that Skinner that year was still in baseball at the age of 76, serving as a scout for the Astros. Skinner's son Joel Skinner has followed his father into a long baseball career. He most recently served as a bench coach for the Athletics in 2011.
For a feature on Skinner's playing career, go to Bob Skinner, Play Whenever