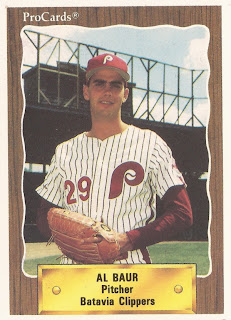 Going into summer 1989, a 21-year-old Al Baur drove from his home in Philadelphia to a Phillies tryout in Delaware, The Philadelphia Daily News wrote.

"I told my father this was it," Baur told The Daily News just over a year later. "If I didn't make it, I was hanging it up. I knew my age was against me. Most clubs are looking for kids in their teens."

Baur did make it, getting signed and sent to rookie ball. He spoke to The Daily News in July 1990, having made it to single-A Spartanburg, up from short-season Batavia.

Baur, though, would never made it back home to Philadelphia, at least to play. That second season as a pro was also his last.

Baur's professional career began in 1989, sent by the Phillies to rookie Martinsville. Before that, Baur pitched for his high school team. He also got praise from his coach, according to The Daily News, the coach comparing Baur to another player, one who made the majors.

"From the little I've seen of Baur so far, I'd say he's as good as George Riley," coach John Pendino told The Daily News in 1986. Riley was a Southern grad who then played for the Expos. "He throws strikes, he's around the knees, he has a nice motion . . . I'd like to see him become a little tougher."

Baur was then a senior in high school. A few years later, he was with the Phillies, playing at Martinsville. There, the pitcher got into 19 games in relief, posting a 4.24 ERA.

That July, the month after he made it through that tryout, Baur told The Daily News playing as a pro was just a thrill.

"This is what I always wanted to do: play professional ball," Baur told The Daily News.

For 1990, Baur moved to short-season Batavia, getting 13 relief outings there. He posted a 2.28 ERA there and moved up to single-A Spartanburg. At Spartanburg, Baur got into 12 games, giving up eight earned runs in 26 innings of work, for a 2.77 ERA. But it was Baur's final season as a pro.

Baur has gone on to have a son of his own, and watch that son also play the game. In 2013, the younger Baur, Albert Baur, was playing at Newberry College in South Carolina, and summer ball in the Northwoods League, according to The South Philly Review.