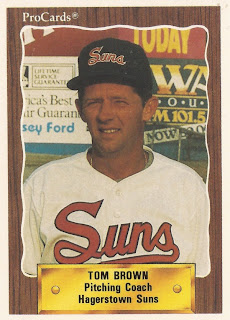 McDonald eventually did play ball, doing so in the majors for nine seasons. And Brown has gone on to continue to coach in the minors, helping others get to the majors for more than two decades, continuing into 2013 as pitching coach at AA Pensacola.

Brown's career began in 1971, signed by the Royals as an undrafted free agent out of the University of Louisiana-Monroe.