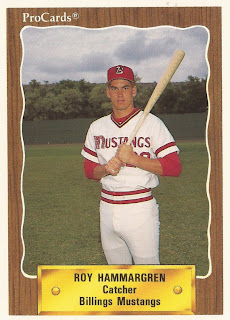 Yavapai College's baseball coach Dave Dangler could only marvel in February 1989, after his team lost to Arizona State's junior varsity team 9 to 1, according to The Prescott Courier.

He also had to tip his cap to several Arizona State hitters, including Roy Hammargren, also known as Tucker Hammargren

"When you talk about people like (ASU's Bob) Dombrowski, Tucker Hammargren and Steve Martin, those guys have hit the ball at a high level," Dangler told The Courier.

Hammargren hit the ball at a high enough level to get the notice of the Reds, who took him in the next year's draft. Hammargren, though, never got to hit at a high level in the pros. He played just three seasons, never making it above single-A.

Hammargren's pro career began in 1990, taken by the Reds in the 17th round out of Arizona State.

Hammargren played at Arizona State for three seasons, from 1988 to 1990. In March 1988, Hammargren helped preserve an Arizona State no-hitter. Playing first base in the seventh inning, Hammargren had to snag a ball backhand, recording the out. The no-hitter would be Arizona's first in 12 years.

With the Reds, Hammargren started at rookie Billings. He split his time between catching and playing first base. In 57 games, Hammargren hit .296, with nine home runs and 45 RBIs.

In 1991, Hammargren split time between single-A Cedar Rapids and single-A Charleston. Between them, though, he hit just .200. He did pick up a pinch-hit in a May game with Charleston, trying to spark a Charleston comeback.