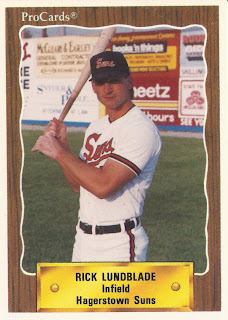 Rick Lundblade played his first season as a pro. Then he quit and went home, according to The Philadelphia Inquirer.

But, after working building houses for a couple months, the former Phillies farmhand and native of Eureka, Ca., gave his old team a call. He wanted to return, The Inquirer wrote.

"When you're used to playing ball every day all summer, it's tough to give up something like that," Lundblade told The Inquirer in spring 1987. "At the time I quit, I didn't really think about the consequences. But after two months of having the entire town of Eureka come up and tell you how you screwed up . . . it begins to dawn on you that this is a rare opportunity."

Lundblade spoke that spring as he prepared to go into his third professional season, in his first major league camp. But, while he did return, and his career ultimately spanned six seasons, Lundblade never did make the majors.

Lundblade's professional career began in 1985, taken by the Phillies in the sixth round, out of Stanford University.

With Stanford, Lundblade helped power the team to the 1985 College World Series with 24 home runs on the season. As the tournament was underway, Lundblade told The South Florida Sun-Sentinel how he turned himself into a power hitter, through workouts.

"I put myself on a rigorous weight-training program. I had no one there to supervise me, so I did my own thing," Lundblade told The Sun-Sentinel. "I did what I thought was best. I worked mostly on my upper body, especially my arms and back. As a result, my legs are underdeveloped."

With the Phillies, Lundblade started at short-season Bend. In 68 games, Lundblade hit 15 home runs, with a .281 average.

After returning to the field in 1986, Lundblade ended up playing 70 games at Clearwater and 20 up at AA Reading. He hit .261 between them, with nine home runs.

Lundblade's time at Reading caught the eye of his manager George Culver, Culver telling The Reading Eagle fans buzzed as Lundblade stepped to the plate.

"They knew he was going to hit a rope somewhere," Culver told The Eagle. "You love to see aggressive hitters like that."

Lundblade returned to Reading for 1987, then again in 1988. It was also in 1988 that Lundblade got his first look at AAA Maine, 17 games. Midway through the year, Lundblade moved to the Mets system, and AA Jackson.

Lundblade moved to AAA Tidewater for 1989, getting into 46 games. In a May game, he knocked two solo home runs helping Tidewater to a win.