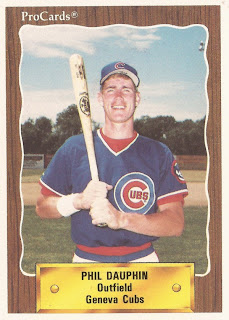 In his second season at AA in 1993, Phil Dauphin was having success, enough so that there was talk of him moving up, according to The Orlando Sentinel.

As far as making the majors, Dauphin knew there was still work to be done.

"That's my long-term goal," Dauphin told The Sentinel that June. "I just want to keep plugging away, make steady improvements in my game and the rest will take care of itself."

Dauphin ultimately plugged away for seven seasons. And, while he did move up to AAA later in 1993, he never made the ultimate jump to the bigs.

Dauphin's career began in 1990, taken by the Cubs in the eighth round out of the University of Indiana.

At Indiana, Dauphin hit a two-run home run for the Hoosiers in an April 1989 win. At the end of March 1990, Dauphin led his team with eight home runs on the year and a .451 average.

With the Cubs, Dauphin started at short-season Geneva, his average dropping to .236 in 73 games. He also hit 12 home runs.

For 1993, Dauphin stayed at AA, moving with the team to Orlando. By late May, Dauphin had eight home runs, five hit in a span of less than two weeks and two hit in one game, according to The Sentinel.  In late-June, Dauphin hit an inside-the-parker.

By August, Dauphin was with AAA Iowa, but he struggled. In 20 games, he hit .222. By the end of August, he was released. Picked up by the Reds, he finished out the year with AAA Indianapolis.