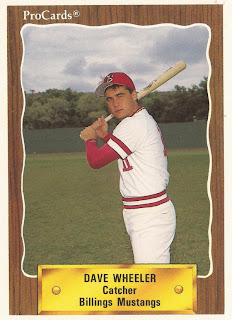 The lineup included local coaches, professional scouts, as well former professional players. Even an umpire was there.

Also on the list of instructors at this February 1991 free baseball clinic for children in Portsmouth, Ohio, was just one player that was listed as still playing. That player was Dave Wheeler, listed by The Portsmouth Daily Times as "Cincinnati Reds minor league catcher."

Wheeler had just finished his first season in the minors at that point, playing 1990 at rookie Billings. Wheeler's time with the Reds organization, and in professional baseball, though, wouldn't extend far beyond that February 1991 baseball clinic. He's not listed as playing again.

Wheeler's brief professional career began in June 1990, signed by the Reds as an undrafted free agent, out of Morehead State University in Kentucky.

With the Reds, Wheeler was sent to rookie Billings. There, he got into 38 games, hitting just .137.

He played 20 of those games at catcher, 12 at first base and three in the outfield. In an August 1990 game with Salt Lake, Wheeler, playing first, missed a high pop up on the infield. The ball landed fair, according to The Deseret News, but soon bounced foul, saving Wheeler an error.

That off-season, Wheeler then participated in that youth clinic. It was about an hour north of his listed hometown of Louisa, Ky. Among the sponsors was the Al Oliver Foundation.

"I've been to a lot of clinics and the thing I was most impressed with was the information they relayed to the people," former major leaguer Al Oliver told The Daily Times.

By then, though, Wheeler's career was essentially already in the books, with one season, 38 games played.