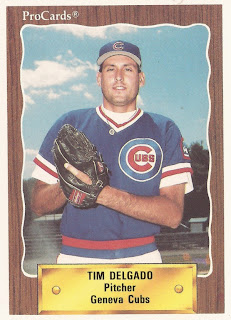 It was just Tim Delgado's second start after his promotion to AA. But he showed why he got moved up.

"He pitched a very good ballgame,'' Jones told The Sentinel of Delgado. "He kept the ball down, and he mixed his speeds well. If he can continue to do that, he should be successful in this league."

Delgado's career began in 1990, signed by the Cubs as an undrafted free agent out of Scottsdale Community College.

Delgado played that first year with short-season Geneva, getting time at high-A Miami. Between them, he got 21 outings, four starts, and a 3.29 ERA.

In 1992, Delgado got his first look at AA, with six relief appearances at Charlotte. He played the rest of the year at high-A Winston-Salem, getting 28 outings, 20 starts there. In one July game with Winston-Salem, Delgado worked himself out of a jam, getting to hitters to hit come-backers.