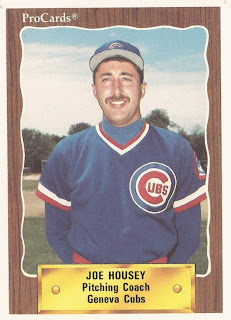 Joe Housey took a one-hit shutout into the ninth inning of this 1980 contest with Little Falls, ultimately picking up a 4-1 win.

It was a pitching performance for the Geneva Cub hurler that impressed a Cubs pitching coach in town for the game, Les Moss, according to The Finger Lakes Times.

"He had good command all the way," Moss told The Times. "That young man has a good arm."

Housey ultimately didn't have good enough command to make the majors. But he did go on to help others with their command as a minor league pitching coach himself, and then find others with good command later as a scout.

Housey's career in baseball began that year in 1980, taken by the Cubs in the second round of the secondary phase of the draft out of the University of New Orleans.

Housey got his first look at AA in 1983, with seven starts at Midland. He went 1-4, with a 7.29 ERA.
He then  played two more seasons, both at AA, ending his playing career after six seasons.

By 1987 Housey had started his new career, as a pitching coach in the minors. That year, he served as pitching coach at single-A Peoria, watching over the Cubs' top draft pick Mike Harkey.

"He's been dealing with a little bit of adversity very well," Housey told The Chicago Tribune of Harkey that August. "He's always kept his composure on the mound. It hasn't concerned him any mentally. He's a mature kind of guy."

Housey continued as a coach in the Cubs system through 1990, when he was back in Geneva, serving as coach there. Housey then turned scout, working with the Cubs through at least 2007.