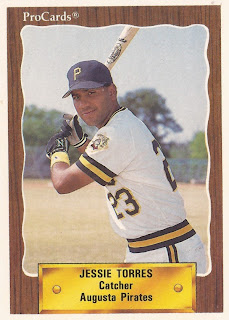 Jessie Torres didn't hit a lot of home runs, but he hit one this night in August 1992.

Torres hit the home run, and picked up a second hit, all while knocking in two, according to The Beaver County Times.

Torres only hit three other home runs in a career that lasted just four seasons. He also didn't get a home run, or an opportunity to get any kind of hit, above AA.

With the Pirates, Torres didn't make it to the field until 1989. That year, Torres played at rookie Princeton, hitting .252 in 39 games. He also hit his first two home runs.

Torres saw time at three different levels in 1991, 23 games back at Augusta, four at high-A Salem and his first 14 games at AA Carolina. Between the levels, he hit .209. At Carolina, Torres picked up just two hits in 30 at bats.