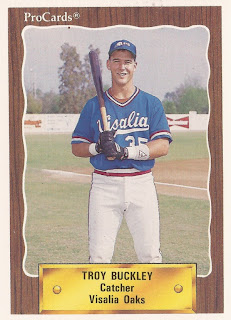 Long Beach State lefty Jason Vargas had started off sloppy in this 2004 outing, allowing four runs in two innings. His pitching coach Troy Buckley did his best to straighten the pitcher out.

Buckley's method was a fake tirade, but a tirade intended to be taken by the young Vargas as real. Buckley was done calling pitches, he told Vargas. Because whatever he called, Vargas couldn't put it there, Buckley recalled to MLB.com in June 2010, as the Seattle Mariner got off to a hot start.

"He just looked at me," Buckley told MLB.com. "It was the first time I'd ever gotten on [him]. ... He thought I was dead serious, and the whole dugout did, too. I had to fake it well to see how he would respond, and he totally did."

The response was four scoreless innings, Vargas even adding a two-run home run. Buckley never told Vargas he was kidding, according MLB.com.

Buckley took that style, a style some called autocratic, to the Pirates system as minor league pitching coordinator and then back to Long Beach State as head coach.

Buckley's career as coach and coordinator began after his own career as a player, pitching six seasons in the minors without making the majors.

Buckley's playing career began in 1989, taken in the ninth round of the draft by the Twins. He didn't make his playing debut, however, until 1990, sent to single-A Visalia.

Buckley, as a catcher, hit .307 at Visalia in 1990 with five home runs. He returned for 1991, his average dropping off to .256. He also played three games at AAA, what would turn out to be his only games at that level.

He didn't make AA until 1993, after he joined the Reds system. He stayed with them into 1995, when he joined the Expos and played at AA Harrisburg. It was Buckley's final year as a player.

Buckley went on to be a coach in the Expos organization, before joining his alma mater Santa Clara as hitting coach. He joined Long Beach State in 2001 where he coached the likes of Vargas and Jered Weaver.

Buckley's time with the Pirates was marked by some bristling under Buckley's methods. When he left in 2009 to spend more time with his family, The Pittsburgh Post-Gazette quoted the teams director of player development as defending Buckley's tenure.

"Being liked is not part of the job," Kyle Stark told The Post-Gazette. "While we have made missteps and need to continue to improve, we have come a long way, and many good things are happening. Look at the individuals who have performed and are getting better, many of whom were not expected to do much. There have been many more successes than failures."

Buckley returned to Long Beach State as an assistant coach and then was named head coach in June 2010.