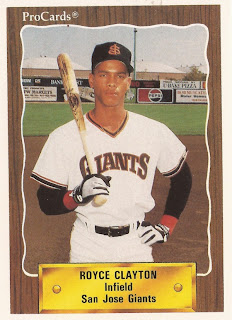 Royce Clayton had been named the top prospect in the minor leagues by The Sporting News earlier in 1991, but Clayton still didn't expect his call-up to come so soon, The Los Angeles Times wrote that September.

"I know I don't have to hit the ball out of the park to drive in runs," Clayton told The Associated Press after the game. "The RBIs were out there and I'm aggressive."

Clayton left St. Louis, traded to Texas, becoming the Rangers' everyday shortstop. Clayton then made way for another top player, Alex Rodriguez. Clayton was traded to the White Sox for 2001, a prospect Clayton looked forward to, according to The AP.

"Once I found out I was traded to the White Sox, I was basically overwhelmed," Clayton told The AP in December 2000. "I was very positive about going to a place where I could win. That was my first and foremost concern."

Clayton started 2007 with the Blue Jays, but he was released in August. He soon signed on with Boston, coming on in September to play his last eight games in the majors. He didn't play in the playoffs, but he was there for the ride, and there when the Red Sox won, according to The Providence Journal.

"There's no better feeling in the world," Clayton told The Journal. "I've played a long time to get to this point. I've worked extremely hard and this is what you play for."

Clayton has since gone on to other pursuits, including a small part in "Moneyball." In 2012, to The Arizona Republic, Clayton looked back on his career.

"I don't look back with any regrets," Clayton told The Republic. "I played my ass off. I never cheated anybody. People can say whatever; I know I'm not going to the Hall of Fame. But a lot of guys did a lot of different things and I never had to do that, and I stayed in the league 17 years. I can tell my kids that's what I did and that's what matters to me."