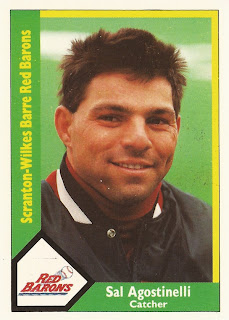 Called to a remote part of Panama, Sal Agostinelli, the Phillies international scouting supervisor looked over the young second baseman. He didn't run well enough to be a second baseman.

So, the local scout Allan Lewis suggested the prospect try catcher and Agostinelli threw some test pitches, to test the prospective backstop's arm to second base, the kid had a good arm, Agostinelli recalled recently.

The question then was, did Lewis really like the guy? He did, the kid was one of the best hitters Lewis, a former major leaguer himself, had ever had in the area.

Who they signed was Carlos Ruiz, now a veteran of seven major league seasons, catcher on the 2008 world champion Phillies and now a major league All-Star.

Agostinelli spoke to The Greatest 21 Days recently by phone, covering his career in baseball from its beginnings as a player to its transition to life as a scout.

His life as a scout has now lasted more than two decades, all with the Phillies. His playing career stretched for a decade before that, though he would never make the majors. Along the way in that scouting career, Agostinelli has had a hand in signing players like Ruiz and current Phillies prospect Freddy Galvis.

Agostinelli's career with the Phillies started before his playing career ended, sent in a trade there for 1989, his seventh season as a pro, in a trade from the team that originally drafted him, the Cardinals.

With the trade, Agostinelli followed Lee Thomas, who moved from his post as St. Louis' minor league director to become Philadelphia's general manager in 1988. With the Phillies, Agostinelli went on to play three more seasons, playing 1989 at AA Reading and most of 1990 at AAA Scranton.

Toward the end, Agostinelli transitioned into being a coach. Real life also started stepping in. In 1992, Agostinelli became a father. He now has three kids, Daniel, Toni-Ann and Anthony.

"I know I could have probably could have hooked on with somebody else, but I'll be honest with you, I'd had enough," Agostinelli said. "It's hard to take the uniform off, but it was kind of a good thing."

After a year serving as a coach, Agostinelli then made the next transition, to being a scout.

Going into it, Agostinelli said he had a good base having been a player himself, and he could use those skills in evaluating talent.

But it's a tough job to master.

"One thing about being a scout is it takes you a long time to figure stuff out," Agostinelli said. "You're always making mistakes. It's a very humbling job."

For his first four years, Agostinelli served as an area scout for the Phillies. In 1997, Agostinelli was offered the job of international scouting supervisor.

From there, Agostinelli started following up on tips from around the world, looking for the next Phillies star.

Galvis, who debuted in Philadelphia in 2012, Agostinelli recalled spotting by chance, when Galvis was 14 years old.

"There was a 14-15-year-old tournament going there and I just kind of stopped in to see what was going on," Agostinelli said. Galvis was there and caught his eye. "We followed him for two years and signed him when he was 16 years old."

Becoming a scout, Agostinelli said some guys have success right away. Others get lucky at it. But it's hard work.

Some players, Agostinelli said, it's obvious they have talent. Those players, though, are the first-runders, the ones who have the 95 mph fastballs.

"I'm not talking about that," Agostinelli said. "There's more to it than that. To be a scout, you've got to be able to draft the guys in the 20th round and try to figure that out."