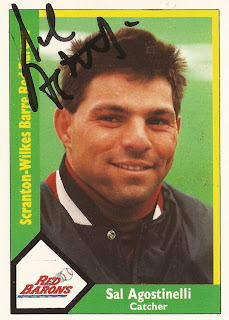 Sal Agostinelli made it major league spring camps, playing with the likes of Ozzie Smith, Terry Pendleton and Jack Clark.

In a playing career that spanned a decade, though, Agostinelli never got to play on the same field with them in the regular season.

"I got a chance to be around a lot of baseball guys and I'm really blessed to have done those things," Agostinelli told The Greatest 21 Days recently. "Although I was never really that upset that I didn't make it to the big leagues, I did everything I could to get there.

Agostinelli spoke to The Greatest 21 Days recently by phone, covering his baseball life from the street fields of the Bronx where he learned the game, to the baseball fields of the Caribbean, South America and beyond, looking for talent in the years since his playing career ended as a scout with the Phillies.

In between, Agostinelli played in 10 minor league seasons, starting in the Cardinals system and ending with the Phillies. He made to AAA in parts of four seasons, but the playing time he needed to take that last step to the majors always seemed to be elusive.

As a scout, Agostinelli got to see other star players and prospects like Carlos Ruiz and Freddy Galvis, seeing the potential in them to be major league players as Agostinelli has worked as the Phillies' international scouting supervisor.

Agostinelli grew up in the Fordham section of the Bronx, near Fordham University. The Yankees were big and Agostinelli recalled learning the game in the street, playing it there with friends.

If he and his friends wanted to play on grass, they'd have to walk miles to get to a baseball field. If they were lucky they'd get a clear parking lot and make their own field, one where they'd have to focus on ground balls, Agostinelli recalled.

"Baseball was a huge thing for us growing up," Agostinelli recalled, adding a short time later. "That's all we ever did was play ball."

When he was 14, Agostinelli and his family moved to Long Island. By the time college came around, Agostinelli was ready to move again, to St. Johns University. Those hopes, though, were seemingly dashed because of his height. Agostinelli is listed at 5 feet, 9 inches tall, though Agostinelli has himself at 5 feet, 7.

So, Agostinelli instead chose Slippery Rock University, a Division II school in Pennsylvania. A friend was going there and Agostinelli went, too. Agostinelli made the team as a freshman and, but his sophomore year, he was a starter.

In 1981, Agostinelli hit .466, still third on the university's all-time list. The next year, the catcher hit a still-impressive .417. "I had a couple good years," Agostinelli said.

He continued his hot-hitting after his junior year, in the Atlantic Collegiate Baseball League, hitting .394, he recalled. But he didn't get drafted that June. What he did get was a late offer from the Braves to sign as a free agent. Agostinelli was back in school by then and passed.

"You never know if you're good enough," Agostinelli said. "I think insecurity plays a big part."

Agostinelli, though, knew he had good years at Slippery Rock, played with guys who were drafted. And, even with his 5'7"-height, he felt that he should have gotten drafted, too.

Regarding his height, Agostinelli recalled not thinking about it growing up. He always seemed to be one of the better players. It was when he got older that it became more of an issue.

"I knew the guys were bigger," Agostinelli said. "but I knew I had some talent. I could run. I was a good athlete. There were things I could do from a tools standpoint."

The, after his senior year at Slippery Rock, Agostinelli's call did come. His call came in the 22nd round of the 1983 draft, taken by the Cardinals.

Agostinelli started with the Cardinals at rookie Johnson City and the transition from Slippery Rock to the pros, Agostinelli recalled, was a big one.

At Johnson City, Agostinelli was facing pitchers who had been some of the top college hurlers in the country. There was also the transition from the aluminum bat to the wood bat.

In 35 games at Johnson City, Agostinelli hit .236. Moving up mid-campaign to short-season Erie, Agostinelli hit a better .260. "I got more accustomed to using the wooden bat at that point, he said.

The next year, at single-A Savannah, Agostinelli recalled starting the year as the backup catcher, and getting really down on himself. By the end of the year, though, he was the starter and the team went to the playoffs.

At single-A St. Petersburg in 1985, Agostinelli continued to get playing time. He also upped his average to .270. Playing time was a continual theme in Agostinelli's playing career.

"When you don't play a lot, you kind of lose it," Agostinelli said. "That's why I really respect the guys that come off the bench in the big leagues."

In 1986, Agostinelli got off to a hot start back at St. Petersburg and made AA Arkansas for the first time. In 58 games there, he hit .237. In 1987, though he spent the year as a backup, Agostinelli felt he still had a productive year back at Arkansas. He also got his first look at AAA Louisville, called up for the playoffs.

Going into 1988, Agostinelli made big league camp as a catcher. During the year, though, he didn't really get to play. Between time at Louisville and back at Arkansas, Agostinelli only played in a total of 52 games.