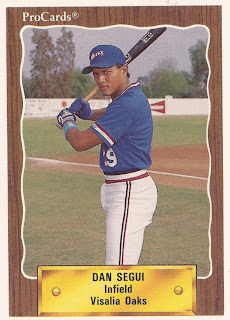 Dan Segui got a call from old teammate Curtis Pride in 2002 to help with a fundraiser and Segui couldn't say no, The South Florida Sun-Sentinel wrote.

The fundraiser was a wiffle ball tournament to benefit Pride's Together with Pride Foundation, an organization aimed at helping educate hearing-impaired children.

"Every kid, I think, grew up playing Wiffle ball," Segui told The Sun-Sentinel at the tournament. He was there with friends he recruited to play. "Some kids never grow up, though."

Segui and Pride played together in the Mets organization, at rookie Kingsport in 1987 and at short-season Pittsfield in 1989. But, while Pride would go on to make the majors over a two-decade-long pro career, Segui's career would be much shorter. Segui would also never make the majors.

Segui's pro career began in 1987, taken by the Mets in the 47th round of the draft, out of Kansas City Community College.

The Mets also took Segui as the son of a former major leaguer. Segui's father, Diego Segui, played in 15 major league seasons, and went on to coach in the minors. Also, taken higher in that same 1987 draft was Segui's brother, David Segui. David would go on to make the majors in 15 seasons himself.

Dan Segui's professional career began at rookie Kingsport in 1987. There, Segui got into 38 games, hitting just .170. He also hit two home runs and knocked in 11.

Segui moved up to short-season Pittsfield for 1989. He started off hot, hitting .375 in his first 19 games, according to The Albany Times-Union.