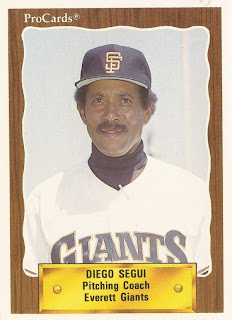 Houston's Lee May tried to explain how he'd been fooled by opposing pitcher Diego Segui's fork ball after that June 1973 game.

Segui came into the eighth inning that day, setting down the first two batters he saw on strikes. The second strikeout victim was May.

"It's more motion than it is his fork ball," May told The Associated Press of Segui's confounding pitch. "You can't pick out a zone where the ball's going to come."

By that time, Segui was in his 12th major league season, serving as both a starter and reliever for five different organizations. He'd recorded double-digit wins three times and a league-leading ERA for the Athletics in 1970.

Segui also went on to get the distinction of playing for both Seattle major league franchises, recording a 12-6 record for the 1969 Pilots, then returning for his final season in 1977 with the new Seattle Mariners.

With the Mariners, the then "ancient" Segui even had the honor of throwing the franchise's first pitches as the first-ever hurler to take the mound for franchise.

Segui's career began back in 1958, signed as an amateur free agent by the Cincinnati Redlegs out of his native Cuba. He then signed for 1959 with the Kansas City Athletics.

By 1962, Segui was in the majors, in Kansas City. He went 8-5 in 37 outings, 13 starts. He ended up playing six of his first seven seasons with the A's, only spending a season in Washington in between.

By 1968, Segui and the Athletics were in Oakland. Segui was also a full-time reliever, getting 52 outings. He also picked up six saves, one of them a three-inning outing in August. After that save, Segui told The AP he was ready for more.

"I could pitch three more innings in the next game if they need me," Segui told The AP.

Segui played in six more major league seasons, moving to the Cardinals and Red Sox, before finally arriving with the new Mariners in 1977. His second stint in Seattle, though, wasn't as successful, the 38-year-old going 0-7 in 40 outings, seven starts.

Segui went on to a short career as a coach, serving as pitching coach at short-season Pocatello in 1987 and 1988, and then at Everett in 1990, never making the majors in that second career.

The year Segui coached at Everett was also the year his son David Segui debuted in the majors, going on to a 15-season major league career of his own.

In December 1997, as David Segui signed with his fathers' old team the Mariners, the son reported the father still threw 200 pitches each day.