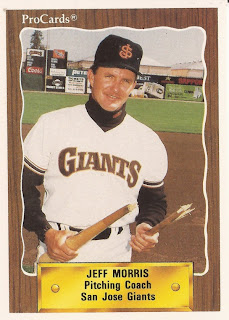 Jeff Morris was trying something different in terms of baseball 1994, in some place markedly different, he told The Tucson Citizen.

"I've seen a lot of places, pitched and coached all over the country," Morris told The Citizen, "but I never dreamed I'd be going to Australia."

Morris was on his way that year to coach in the first incarnation of the Austrialian Baseball League. He was going there with experience helping the University of Arizona win the College World Series both as a player and as a coach, as well as time as both a player and coach in the pros.

After returning from Australia, Morris would continue in the game, serving as both a scout and a coach again with Arizona.

Morris' professional career began in 1980, taken by the Astros in the 15th round of the draft, out of Arizona.

With the Astros, Morris started in the rookie Gulf Coast League, also playing at single-A Daytona Beach. Between them, Morris went 8-2 in 12 starts, with a 1.24 ERA.

After a shortened 1981 season, Morris hit AA Columbus and then AAA Tucson in 1982, going 8-5, with a 3.71 ERA. Morris, though, returned for just one game in 1983, at Tucson, shoulder and knee surgeries conspiring to end his professional playing career.

Morris then returned to Arizona to finish his studies, and serve as a volunteer assistant baseball coach, seeing the Wildcats to the 1986 College World Series championship.

After moving to the Mets as a minor league coach, Morris signed with the Orioles. By 1998, he was a Baltimore scout, returning to Tucson to look over the Arizona staff. To The Arizona Daily Wildcat, Morris, a former left-handed pitcher himself, sized up another young lefty in Arizona pitcher in James Johnson.

"He's got a leg up because he's left-handed," Morris told The Daily Wildcat. "The game is virtually starving for left-handed pitching and he's got three pretty good (pitches) there."

Soon, Morris was back at Arizona himself, serving as pitching coach into 2003. He has since served as a scout for the Reds. In April 2003, Morris talked up young Arizona hurler Richie Gardner.