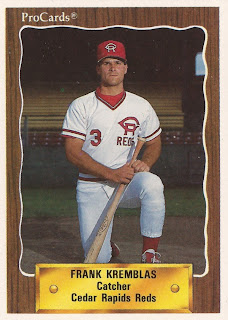 With a decade as a minors manager behind him, Frank Kremblas explained to his hometown Columbus Dispatch in 2009 what he enjoyed about his job.

"Probably the best thing about it is teaching," Kremblas told The Dispatch. "It's fun to teach the fundamentals. But the in-game stuff is probably the most fun -- the strategies, making adjustments to the pitcher they have that night and to what they're doing."

Kremblas was then serving as manager at AAA Indianapolis, with his decade managing, and another eight spent as a player in the minors. He never made the majors in either.

Kremblas' career in baseball began in 1989, taken by the Reds in the 23rd round of the draft out of Eastern Kentucky.

Kremblas was also the son of a man who played a different sport, Frank Kremblas Sr., the quarterback of the late-1950s Ohio State Buckeyes, according to The Dispatch. The younger Kremblas, though, chose baseball.

Kremblas then split 1994 between Chattanooga and Indianapolis. That April, Kremblas was the opposing third baseman for Michael Jordan's professional baseball debut, asking the umpire to do something about all the flashbulbs going off, according to The Associated Press.

Kremblas continued playing through 1996, but never made the majors. By 1998, Kremblas was a manager, with the Expos in the Gulf Coast League. He first got a AA managerial position with the Brewers at Huntsville in 2002.

In late 2003, Kremblas was managing in the Arizona Fall League, watching over young Brewers players there. Among them, was top draft pick Dave Krynzel.

"He has his hands in a better position to hit from," Kremblas told Baseball America that October of improvement Krynzel showed. "He's not getting his hands stuck behind him. It's a ripple effect; he's swinging the bat better and he is more confident."

Kremblas then made AAA as a manager in 2005, with Nashville. That 2005 season was the first of three-straight years Kremblas took Nashville to the playoffs.

The 2005 season saw Kremblas take Nashville all the way to the Pacific Coast League championship.

"We were the only people cheering at that point," Kremblas told MiLB.com of the 13th-inning game-winning home run. "The guys just battled, just like they've done all year. They kept battling and battling and got things done when they needed to."