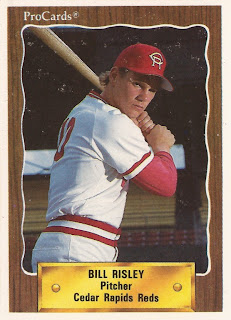 The moment could hardly have been bigger for the Mariners' Bill Risley.

Coming into the ninth inning, tying run at the plate of this franchise-defining game, Risley proceed to get two tension-filled outs, pick up his second-career save and send the Mariners on to Game 5.

"I was not nervous at all, no butterflies, nothing," Risley told author Chris Donnelly for his 2010 book Baseball's Greatest Series of taking the mound in that game. "Lou (Pinella) told me to 'relax like you've never relaxed before.' That really helped me because he knows I'm an intense guy and I try to overdo it."

In a career that spanned seven total seasons, Risley's career save total would remain at two. He would never get another.

Risley's career began in 1987, taken by the Reds in the 14th round of the draft out of Harry S Truman College in Chicago.

The hurler began work that year in the rookie Gulf Coast League, moving to single-A Greensboro in 1988, then single-A Cedar Rapids in 1989. He first hit AA Chattanooga in 1991, then AAA Nashville that same year.

In July 1992, after a trade to Montreal, Risley debuted with the Expos in the major leagues. In that debut, Risley got the start, going five innings. He gave up just one earned run, earned the win, and didn't get back to the bigs until the next season.

Risley returned to Montreal for 1993, doubling his major league time to two games. In three innings of work, he gave up two earned runs. For 1994, though, he arrived with the Mariners, taken off waivers. His major league time also increased dramatically.

With the Mariners in 1994, Risley got into 37 games, posting a 3.44 ERA and picking up nine wins in relief. In May, as he threw on three consecutive days, the Mariners were just happy to have him.

"Here he was pitching his third day in a row. He held the same stuff for three days. He still had the same velocity. He was throwing strikes," Mariners pitching coach Sammy Ellis told The Seattle Times. "A year ago we didn't have an arm like that in the system. Heck, we didn't think an arm like that existed."

Risley returned for another 45 games in 1995, picking up a regular season save and then that pivotal postseason save.

In all, Risley pitched in seven postseason games that year for the Mariners, 5.2 innings. The two earned runs he gave up were in the same outing.

"We know we have to go out and win every game," Risley told The Associated Press after that September win. "Mathematically we're still in it."