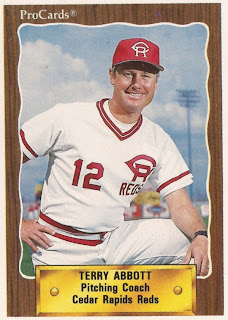 His pitching coach Terry Abbott had faith in the young hurler in his second pro season. The stretch, Abbott told The Palm Beach Post, was something James could learn from.

"That's part of life - adversity," told The Post in June 2011. "He's learning how to overcome, fight through it, and keep going."

Behind those observations from Abbott were more than three decades in the game himself, part of a career that saw him as a pitcher in the minors and later as a coach, scout and instructor.

Abbott's baseball career began in 1977, taken by the Braves in the 15th round of the draft out of Jacksonville State.

Abbott's playing career, though, lasted just two seasons. He played his first year at rookie Kingsport, going 7-3 in 14 outings. His second and final year came in 1978, at single-A Greenwood. He went 8-5 in 25 outings.

His playing career over, Abbott turned to coaching. He coach in high school for nine seasons, before taking pitching coach duties at single-A Augusta in 1989. By 1989, Abbott was with the Reds, at single-A Cedar Rapids.

He remained with the Reds in 1996, serving as pitching coach at rookie Princeton. In late 1999, Abbott was named Reds scouting supervisor. By 2011, he was with the Marlins, at Jupiter.

Abbott has also worked as an instructor, with Around The Horn Baseball in Florida.

In 1997, Abbott ran a youth baseball camp that included other members of the Reds organization, including Barry Larkin and Bret Boone, The Orlando Sentinel wrote. The group talked about hitting, but also about faith.