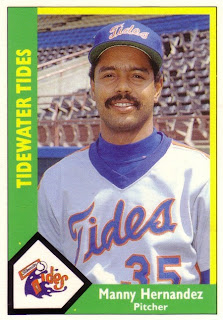 Their reaction to that first call-up.

Those are stories of real emotion, of players realizing their dream of finally making it.

One of the earlier features, one redone here in September, was of pitcher and 1990 member of the Tidewater Tides Manny Hernandez. Hernandez ultimately played in three major league seasons, getting seven starts, 16 outings.

His reaction to his call up and first start, though, as told to The Houston Chronicle, seemed to capture that exact feeling of joy at the achievement.

"My dream came true tonight," Hernandez told The Chronicle after that 1986 start. "I've spent seven years waiting for this night. I never got discouraged though. I kept working hard, no matter where I was sent, to realize my dream." 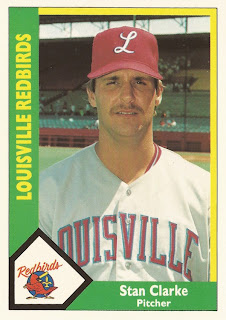 I made references to the movie, and its late-80s counterpart Field of Dreams, early on. But I quickly realized such references weren't needed. The stories spoke for themselves.

Like the story of Stan Clarke, a member of the 1990 Louisville Redbirds. Clarke made the majors in 1983 for 10 relief outings with the Blue Jays. The next year, he injured his shoulder.

"When I blew my shoulder out (in 1984), I thought I'd never pitch again," Clarke told The Associated Press. "To me, this is the finest, finest win that's ever come in my career."

From the start, I tracked whether a player made the majors or didn't. Soon, I added the tracker for how many years they saw time in the majors - and how many they spent in the minors with little or no success in the majors. 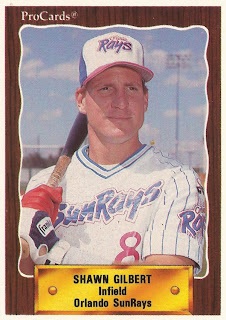 The length of stay in the minors always was an interest here, especially for the guys who stuck it out for a decade or more, and then got their shot.

I was actually fortunate enough to interview a couple guys who did just that, Bronswell Patrick and Webster Garrison. I'll reference the interviews, what have to be the coolest part of this project, in another post.

But among that larger group was Shawn Gilbert. Gilbert spent 10 seasons in the minors, without getting his call. Then, in his 11th, he made the Mets.

Those are just three of the stories I came across looking back over the project. Browse to find others:
By Player Name; by Player Team; by Date Featured; and by Card Number.

Apart from stories on the field, though, the 1990 CMC set provided almost as many stories of real life, from off if it. Some of those were heart breaking.