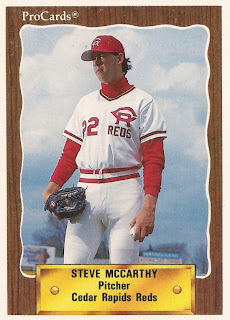 Bobby Ayala started the game and Steve McCarthy finished it.

After Ayala went eight innings for single-A Charleston in this July 1990 contest. McCarthy then came in and finished up with a perfect ninth inning, picking up a strike out and picking up his 10th save on the year.

The appearance was one of 37 he saw that season between Charleston and single-A Cedar Rapids, posting a 2.16 ERA between them.

Those 10 saves were also about all the saves McCarthy notched in a career that spanned five seasons. The reliever picked up four other saves over those seasons. He never got a chance to notch one, or  chance to get playing time, in the majors.

McCarthy's professional career began in 1987, taken by the Reds in the 11th round of the draft out of Brown University.

McCarthy returned to Billings for a shortened 1988, but as a reliever. He carried that over for 30 relief outings at Cedar Rapids in 1989. In Iowa, he picked up five wins, and posted 1.51 ERA.

After that 1990 season, McCarthy returned to Cedar Rapids for much of 1991, getting 32 outings there.

McCarthy, though, also got his first look at AA Chattanooga in 1991, 12 outings. Those outings in Chattanooga would also be his final outings there, his career ending at season's end.