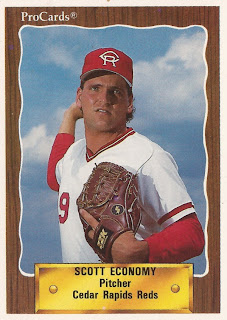 At James Madison University, Scott Economy lettered in baseball over two seasons, 1986 and 1987.

He also did well enough there to drafted by his home state Reds in the 21st round of the 1987 draft.

For Economy, though, his professional career only lasted four seasons, an apparent injury and surgery coming at career's end.

Economy arrived at James Madison, from Rocky River, Ohio, near Cleveland. With the Reds, Economy started in 1987 at rookie Billings.

At Billings, Economy worked mainly as a reliever. He got into 17 games, starting one. Over those outings, Economy pitched 39.1 innings, giving up 15 earned runs. He also picked up four wins to no losses.

Economy arrived at single-A Cedar Rapids in 1989. It was the highest level he'd reach.

He then returned to Cedar Rapids for 1990. But his season that year was brief, just four relief outings. He gave up three earned runs in 7.1 innings of work.

By July, though, Economy was to undergo apparently some type of procedure, according to The Cedar Rapids Gazette. That coincided with the end of his professional baseball career.