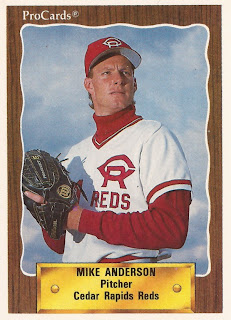 The Reds were looking to the future in July 1993 and that future possibly included Mike Anderson and other young pitchers, according to The Associated Press.

"That's going to our main deal from here on out - to get some pitching," Bowden told The AP. "That's what's going to turn this organization around and get us winning again."

Bowden spoke that July as the Reds prepared to call Anderson up from AAA. Anderson, though, didn't get his first look in a game until later that year, in September. For Anderson it was a brief look, just three appearances, the extent of his major league career.

He also had a hand in a four-home-run game, on the wrong end.

Anderson's career began in 1988, signed by the Reds as an amateur free agent out of Southwestern University.

He played that first year between the rookie Gulf Coast League and rookie Billings, going 3-2 between them over 19 outings. He moved to single-A Greensboro in 1989, then Cedar Rapids in 1990.

Anderson made AA Chattanooga in 1991, then AAA Indianapolis in 1993. Then, in September 1993, Anderson made Cincinnati.

Anderson debuted Sept. 7, against the Cardinals. It was Mark Whiten's four-home-run game. Anderson came into the game in the sixth inning, his Reds down 5-2. He gives up two walks, then gave up Whiten's second home run of the game.

Anderson stayed in for the seventh, long enough to see Whiten again, and give up Whiten's third home run. In all, Anderson went 1.2 innings, giving up seven earned runs.

That December, Anderson landed with the Cubs, in a trade. But Anderson never saw Chicago, or saw the majors again. He played 1994 and 1995 at AAA Iowa, then played 1996 with the Rangers at AAA and 1997 in the minors with the Dodgers. One final year, playing in Korea, and Anderson's career was done.

His playing career over, Anderson went on to a career in coaching. In 2000, he served as pitching coach at short-season Eugene. In 2007, he was in Bakersfield, going through Lansing, Daytona and West Tennessee in the meantime.

In 2000, with Eugene, Anderson watched over young pitcher Mark Freed. Freed went on to go 9-2 that year under Anderson, though Freed never made the majors.