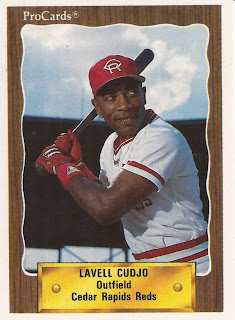 Lavell Cudjo often went by his nickname, a colorful moniker he'd had since he was a kid.

The nickname, "Hippie" Cudjo, came from Cudjo's grandmother, the result of long, braided hair and a dislike of shoes growing up, according to his hometown Sarasota Herald-Tribune.

"Some people don't even know my first name," Cudjo told The Herald-Tribune in 2007 as the paper caught up with the former local high school star.

By the time he turned pro, those "hippie" looks were gone. In a career that lasted six seasons, though, Cudjo was unable to earn another nickname, that of major leaguer.

Cudjo's professional career began in 1987, taken by the Reds in the 20th round, out of Charlotte High School in Florida.

He played that first year in the Reds system in rookie ball, in the Gulf Coast League. In 37 games, Cudjo hit just .143. He returned there for 55 more games in 1988, the outfielder improving his average to .258.

For 1989, Cudjo moved to single-A Greensboro. He hit .295 in 119 games. He also stole 28 bases. In one April game, Cudjo happened to be one of five people ejected from a contest after a brawl.

He moved to single-A Cedar Rapids in 1990. His season there, though, was short. He got into 30 games, hitting just .127, ending his career in the Reds system.

That December, Cudjo moved to the Mariners system, taken in the minor league draft.

With the Mariners, Cudjo played at high-A Peninsula. In 60 games in the outfield, Cudjo hit .246. He also got three games on the mound, as a pitcher, a position he'd played in high school. In 2.1 innings, he gave up five earned runs.

In one August blowout, though, Cudjo pitched the 1-2-3 ninth inning, according to The Newport News Daily Press.

"I was just throwing strikes," Cudjo told The Daily Press afterward. "I have an accurate arm from the outfield, and they just told me to come in and take it seriously. They didn't want me to play around and hurt my arm."