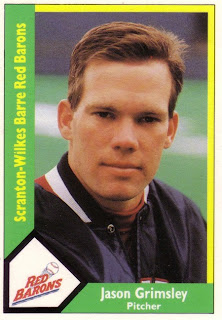 The goal of each of the players in the 1990 CMC set, and minor leaguers as a whole, was to make the majors. If they achieved that, then the ultimate goal was to stick there, become a star, become famous.

A handful in the set, though, achieved much the opposite of that ultimate goal. They ended up not exactly being famous, but rather infamous.

In some cases, that marker came from entanglement in an era that stained the game, an era that wasn't exposed until years later, the steroid era.

In other cases, that came from more serious allegations, ones that involved run-ins with the law. One set member even became a fugitive, one of Texas' biggest deadbeat dads.

Perhaps the most well-known of these players was Jason Grimsley, who played for the 1990 Scranton-Wilkes Barre Red Barons. Grimsley later found himself in the center of baseball's steroids investigation when he received a shipment of human growth hormone at his house. He also later admitted to the FBI that he used the drug.

The incident included Grimsley with seven others in the CMC set who were mentioned negatively in the Mitchell Report. By 2007, he was in virtual seclusion, declining through his agent an interview with ESPN.

"He is not interested in doing any interviews," Grimsley's agent Joe Bick told ESPN. "This is a guy who got caught cheating and wants to move on. He just wants to get his life back together, not in the public eye." 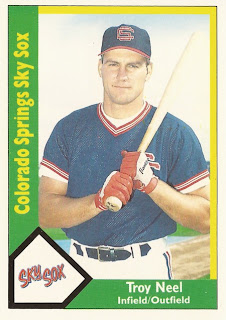 Troy Neel made the majors for parts of three seasons, hitting a total of 37 home runs for the Athletics in that span. That was after he spent the 1990 season in the Indians system at AAA Colorado Springs.

He ended up continuing to play into 2001, spending six seasons in Japan.

Along the way, though, Neel also became a father to two children he failed to support. By 2002, he owed $220,000 and was on Texas' list of most wanted deadbeat dads. Along the way, Neel purchased his own island in the South Pacific.

Authorities caught up with him in late 2008. In May 2009, Neel pleaded guilty and faced two years in state prison. He also later reached a settlement with his ex-wife, agreeing to pay a fraction of what he owed, $116,000.

"After retiring from professional sports, Neel had the financial resources to purchase an island resort in the South Pacific – but he failed to support his children," Texas Attorney General Greg Abbott said in a statement after Neel's May 2009 plea. "Today’s guilty plea marks an important chapter in the state’s lengthy effort to hold Troy Neel accountable for violating the law." 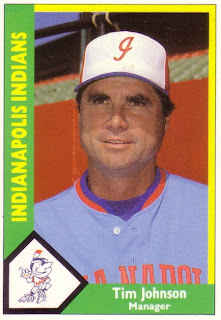 Then there was Tim Johnson, manager for 1990 at AAA Indianapolis. What he did to catch people's ire was to tell stories to try to motivate his players.

Those stories involved his service in Vietnam, Johnson trying to use that service to focus his players, put their problems in perspective.

Problem was, Johnson never served in Vietnam. By the time he was called on the stories, Johnson was in the major leagues, as manager of the Blue Jays. The revelations came out late in the 1998 season. By spring 1999, Johnson was fired.


By 2003, Johnson was managing again, but he was about as far away from where he was as he could be, in independent ball. That year he was interviewed by The Kansas City Star.