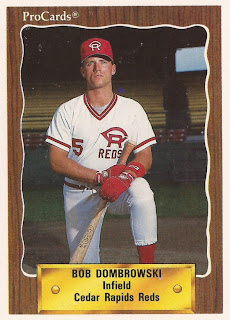 Upon further review, though, the season-long recovery time shrunk to a third of a season recovery prognosis, according to a wire account.

Dombroski, though, came back and he came back all the way to be selected in the 18th round of the draft in 1989.

He came back to turn pro. But Dombrowski couldn't get himself to the majors, his pro career lasting just two season.

Dombrowski arrived at Arizona State in 1985 out of Coronado High School in Scottsdale, Ariz.

Dombrowski played with the Sun Devils from 1985 to 1989, homering in one February 1989 win. In between, Dombrowski also played a summer college ball in Alaska with the Goldpanners.

Out of Arizona State, Bombrowski landed with the Reds. That first season, he played 38 games between rookie Billings and single-A Cedar Rapids. Between them, Dombrowski hit just .213, with one home run.

He then started 1990 back at Cedar Rapids, but it was a short stay. He got into 10 games, picking up just two hits in 21 at bats, ending his brief Reds career.

Dombrowski then signed on with the Padres, playing at high-A Riverside. In 85 games to finish out the season, Dombrowski only improved his average to .208. Dombrowski's time at Riverside also ended his brief professional career short of the majors.